Les Brown Vs. The Old Lady and Her Lumpy Lab 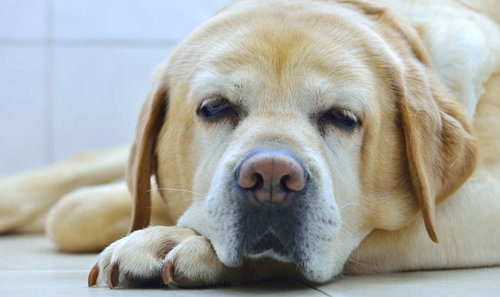 Les Brown Vs. The Old Lady and Her Lumpy Lab

The next installment of “Famous quotes to reconsider”:

Les Brown Vs. the Old Lady and Her Lumpy Dog

FOMO (Fear of Missing Out – I learned that term over the summer and my children made fun of me as if I’d just learned what ‘LOL’ means) is the reason I still have a LinkedIn account.

Every once-in-a-while I go on with the intention of getting off, and find a pearl, and a reason to stay.

The invitations pile-up and I go through them. There are 4 categories of LinkedIn invitations:
1) People who are genuinely interested in what it is I do, and also want to share what they’re creating in the world.
2) People who want to help me “Grow my business to 6-figures!” (often with means that seem awfully insincere, and make me want to puke.)
3) People who seem to think what I do is in the same vein of what they do, so invite me to increase their ‘numbers.’
4) People who mistook LinkedIn for Tinder.

As I was sifting through the invitations, feeling more benevolent with each click of “Accept” – as if mine was the actual HAND OF GOD, saying “you’ll do” (LinkedIn makes me feel both like a pompous asshole and a deity, all at once), one of the invitations from category #2 had a quote from Les Brown, one of the patriarchs of the motivational/human potential movement:

“Life is a fight for territory and once you stop fighting for what you want, what you don’t want will automatically take over.”

I think it was meant to inspire me into action, but it actually had the effect of making me feel simultaneously heavy, sad, ew, and compassion.

The words that came with the feeling were something like:

And then a question: “That’s friggin’ LES BROWN, dude! How do YOU know that it just ain’t so? (“who do you think you are?”) Etc.

So, I did what I always do when I need an answer to a question, and took my little dog, “Mr. Big,” for a walk.

Biggie and I cozily mozied to the park – him in his harness, and me in my earbuds. The background noise of any Big-walk is either:
a) a podcast
b) my Spotify “Shoe Review” playlist -OR-
c) the noise of the trail in the park near my house (earbuds pocketed).

Despite the potential of great spiritual teachers, or moving instrumentals wafting through my earbuds, we walked to the park in the silence of the morning – well, not silence. There were birds, barks, breezes, and neighborly conversations about the hoarder down the street.

When we arrived at the parking lot of the park, I began to worry about my own hoarding tendency at the ‘Mutt Mitt’ dispenser. I over-achieve in the whole “be responsible and clean up after your pet”-thing, and have a tendency to over-draw bags just-in-case (just in case what? In case I have to take a crap on the trail too?).

During my momentary pause to worry if I’m a Mutt-Mitt hoarder, I saw a seasoned citizen getting out of her very seasoned, weathered-blue, Chevrolet Minivan.

Slowly slowly, like some sort of old-person seat-scootch ballet, she made her way out of the vehicle.

Her dance finally brought her feet to the ground, and she turned-around to face the van to steady herself for another shuffle to the right, to open the passenger door to retrieve her walker.

I allowed Mr. Big this rare opportunity to sniff whatever he wanted for as long as he wanted, as I indulged my old-person voyeurism, intensified by the old woman’s buttercup-yellow cardigan (obviously purchased from Mr. Roger’s Female clothing line, or The Gap, cira 1988).

She folded-open the wheel-walker (the kind with the tennis balls on the back feet), and wheel-walked herself around to the back of the van to open the back door to collect another item.

From my vantage point, I saw her bend at the hips and reach forward with both arms stretched-out directly in front, then circle them to the sides as she stood up again. She repeated this motion 4 or 5 times – like some version of geezer tai-chi.

Then! A big, furry, yellow lab head popped-up to announce what this mystery movement was for – she was warming-up her dog, along with her own body.

After much coaxing and massaging, she stepped to the side to give the dog room to come to the edge of the van, and she ‘helped’ him out as best she could. The big, old dog poured himself out of the minivan, and looked-up at his mistress as if he’d just gotten off a roller coaster made of biscuits.

His energy bespoke the excitement of a puppy restrained by advanced age, with 2 quarter-inch-high pounces that seemed to say: “I’ve made it! Mom! Did you see? I MADE it OUT of the van!”

Even from the distance of where Big and I stood, I could see the old dog was riddled with tumors. He LOOKED lumpy.

After the pair’s brief celebration of getting OUT of the van, the dog led the way down the park sidewalk, unleashed (it didn’t look like he could go anywhere, anyway), like he’d done it a thousand times before (responsible pet owners leash their pets, and put their biodegradable poop into plastic bags that will make it last for-almost-ever.)

With her walker, and a smile that made her face look like one of those cotton-stuffed-in-a-nylon-stocking dolls, she ‘chased’ after him.

It was obvious that he wouldn’t dare veer from the path, or get distracted by a bunny or another dog (like mine). I could feel he would never think of disappointing her, or stress her out with misbehavior or a forced encounter with another human and their dog (unless she invited it.)

This dog was loyal, and a gentleman. He’d even hold his poo until they got back to their yard, where she could more easily pick-it-up.

Their simple joy gave me a soul-boner, and warmed me like a campfire.

I Mean. The pair of them. They were just there to walk. And be alive, in life. For now.

I wanted to go up to them and ask if I could help somehow, even though I sensed that she has already handled almost everything.

Maybe it’s more I wanted to ask for their help.

Help me to see what you see. Help me to understand how you’re so smiling and peaceful and easy, when it’s so obvious that you’ve been in this place for so long – this place that keeps luring me in to trying to expand my territory, when I so often struggle with the territory I’ve got.

When you are young and vibrant and capable, it’s like a twisted obligation to keep increasing your territory. And the juxtaposition of watching the old woman and her dog, against the Les Brown quote, made me think of another quote… the beginning of William Blake’s poem:

Auguries of Innocence
To see a World in a Grain of Sand
And a Heaven in a Wild Flower,
Hold Infinity in the palm of your hand
And Eternity in an hour.

Age and illness are God’s way of saying:

“No, that’s not what I meant. Let me shrink your world down a bit so you can see the eternity and infinity in each every moment. Let me make your world so small, and so slow, that you’ll have time to experience the vast territory you already have in that grain of sand in your hand, and the heaven in that wildflower.”

It is in the seeking of new territory – more stuff, more approval – that you get more of what you don’t want, and you totally miss out on what’s right in front of your face.

Blessed are the meek, the weak, the poor, the old and decrepit. The ones that are really suffering are we arrogant, physically-capable-of-grabbing-more-wealth-and-stuff-and-territory, who misguidedly believe that we have a show to run.

I think you’ve got it backwards, Mr. Brown.

“Life is a fight for territory and once you stop fighting for what you want, what you don’t want will automatically take over.” ??

I think that when you stop fighting, because you’re no longer able, God rushes back in, and gives you what you were seeking all along.

When you stop fighting for more – either voluntarily, because you’ve seen the senselessness in the struggle – or simply because you can’t anymore, you find that you already have everything you need.

The world in an old, Chevy van; heaven in the good company of an old, lumpy Lab; infinity in birdsongs and dog poo; eternity in a walk down a park trail.

So, after indulging my geezer/lumpy dog voyeurism for a while, and downloading the meaning of life, I selected Hanz Zimmer’s “You’re So Cool” instrumental from the movie True Romance, and let it rip on repeat.

Sometimes I rush our walks (Mr. Big and I) – even when I’ve got nothing to do, or nowhere to get to… perhaps fighting for some imaginary territory.

This morning, after the lesson from my two new gurus – the old woman and her lumpy dog – I let Mr. Big sniff as many things as he wanted, for as long as he wanted…

As “You’re so Cool” played, I watched the “you could be better” voices in my head dissolve like dry ice clouds into a feeling of “thank you for what I’ve got.”

I breathed in the flowers and birds and dust from the trail, and even the adorable way Mr. Big continues to take scooty-paces while he poops (“you need a magazine, buddy?”).

And I found infinity and heaven and eternity and the world, all in a walk with my little dog, Mr. Big – within the territory I’ve already got.

No fighting for nothing.

When you give up the fight, exactly what you want takes over.

There is no fighting for it. There is no effort in here, we are already here.

The territory of which Mr. Brown speaks might take a fight of thousands of hours, or millions of dollars… but I think the one we’re all truly seeking is available in an instant for free.

The absolute peace and freedom of nothing to do, nowhere to go, right here and now.

Exactly as we are.