WELCOME TO MY CORNER OF THE INTERNET…

You might be wondering… “what is it you DO, exactly, Karen?”

Full disclosure, I’m a bit of a wild card, and answering this question is never a seamless affair. Nine times out of ten it results in some kind of squirrely, charming, and entirely unpredictable response. Which is definitely interesting when you’re a last minute invite to an L.A. cocktail party, but not so helpful out there in the “real world.”

And since this is my business website – a shiny digital platform that basically exists to talk about what I DO – I figure I’d better damn well come up with something.

If I just said, “I’m Karen DiMarco, dude,” I’d give the fine people who don’t yet know me an eye-rolling-induced migraine.

Sadly, being a ‘Karen DiMarco’ is not a minted profession. Yet.

And “nurse/transformational coach/science geek/foul-mouthed humorist/teacher/speaker/writer” is an awkward mouthful that doesn’t exactly fit on a business card. And still doesn’t cover the whole she-bang. (Yes, I did just say “she-bang.” You’re welcome.)

I could come up with a carefully crafted description of what I do – written in the 3rd person like an asshole – in an attempt to make myself look good. But that generally gives me skin crawlies, pinchy armpits, and indigestion. So I’m going to go with the really short version:

When people invite me to work with them and share how I see the world, cool shit happens.

So, I guess that makes me an accidental (but enthusiastic) purveyor of “cool shit.”

Instead of trying to explain that in any detail, I’m gonna hop off my rickety soap box, and let others do the talking….

What can I say about ‘the Karen DiMarco’?

I can try all the clichés about being authentic, caring and…and….

But what I would rather say is… She’s a whirlwind of honesty and authenticity.  Not only is she happy to call you out on your own bullshit, she’ll call herself out just as quickly.

What you see is what you get, and what you get is grounded in absolute Karen.  Like all of us, she has her challenges, but her unabashed honesty in living and sharing life as she experiences it, looks like laughing so hard in the face of adversity that you can’t breathe, and looking for that firm footing so we can find our bearings and navigate our way through our days.

Karen sees and shares the beauty of ordinary, everyday life, and it changes you. It slows me down enough to be reminded of the Divine spark that is in everything, everywhere.

Something about Karen just said to me ‘she’s the one’ – and working with her has been one of THE best investments I’ve ever made.

She’s not only extremely knowledgeable, but she explains everything in a ‘Dummy’s guide’ way making it simple and interesting to understand. I love her take on life, and how she points you to see the truth for yourself.

Her ability to unfailingly answer what I thought were obscure questions, really impressed me.  And while she does squirrel off, and you wonder where you’re going, it always makes sense in the end. She also has very flexible legs, and it was always interesting to see where they ended up by the end of the session.

Getting a different perspective from Karen (and her flexible legs) made a huge difference!

I wouldn’t say that Karen’s truth bombs were devastating, but they sure as hell disrupted my world view. Like, chin drops to the floor and eyes bulge out of sockets kind of truth bombs. I had spent my entire life seeking, fixing, and controlling, and I thought that was normal. Especially the seeking and fixing part. I mean if someone more credible than me could give me the answer to a problem, that was the best-case scenario, right? I was stubborn, but with Karen’s ever-present whack-a-doo presence, she kept turning me back in the direction of my own inner knowing.

From this place I started to live less in fear (which was my constant companion for a long ass time) and started to make decisions about based on what I wanted, what I thought was right, and what lit a fire under me. Things started to change. My relationship with my children did a 180, my husband and I are closer, and I created a thriving business. And when I was diagnosed with cancer, I figured out what I wanted to do from my own place of knowing, and let the experts guide me, but not decide for me.

I started to see all the beliefs I had around who I thought I was because I thought that if I could pin down who I was to a freakin’ science, then everything would be ok. Karen, the truth-bomb slinger, reminded me that I was always ok, under any and all circumstances. You know what that did? Those beliefs toppled over like a finger flick to a house of cards, because who I am is not defined by any belief I have about myself, and that, my friends, is FREEDOM.

After working with Karen, life feels friendlier. In the past, I have been an excellent habit-maker – habitual affirmations, mostly dead repetitions. But now, I’m actually beginning to feel the friendliness. Life feels more like an interesting adventure, than like a terrifying insult, or attack on my feeling of peace, purpose, curiosity, and joy.

I am less frequently resisting, resenting, and ‘tolerating’- which is somehow letting me show up with more presence, fearlessness, and experiencing more curiosity, and a sense of adventure.

I have ‘less on it’ – less on all of it. And there’s a bigger piece… When I do ‘lose it’, it’s fewer times and farther between and I don’t dive in with as much commitment! I have been opened-up to so much more space, time, and presence.

Other cool shit includes, but is not limited to, the following:

Freedom WITH means there is no more waiting for life to begin when…When I have more energy, get more sleep, THEN life can begin.

Waiting for that shit to make you feel whole, and make life feel better, doesn’t work.

On my own crazy journey to this very same truth, (more on that here) I realized that all I’ve ever wanted was to close the gap between who I was and who I thought I should be.

I’d just been looking in the wrong places. I’d mistakenly thought that when I finally arrived at wherever I thought I was going, there would be unicorns farting rainbows, and fame and fortune.

We’ve become so accustomed to TRYING and EFFORTING to BECOME something, that we’ve lost our way…

Turns out it wasn’t in the effort, or the waiting. It was right here, in the surrender. In coming home. To a place we never left.

Bottom line, who you are IS cool shit. And that’s my gig – helping you to close the gap between who you truly are, and who you think you ought to be. 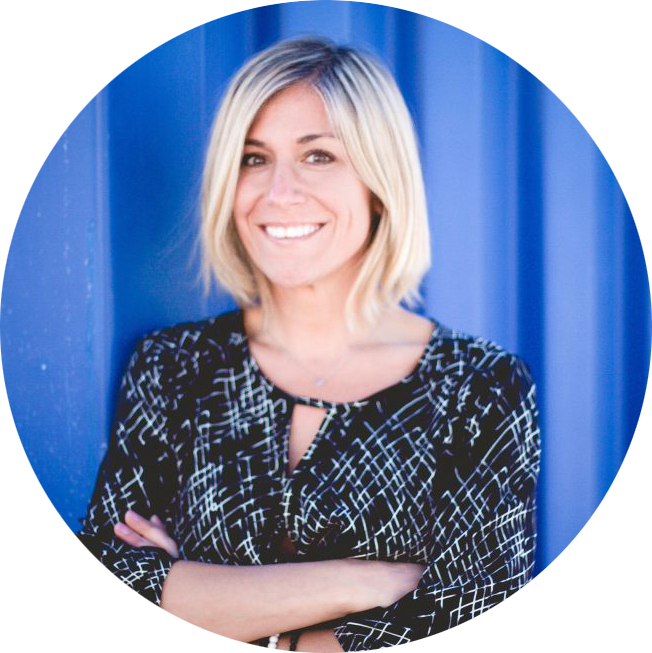 A nurse for 22 years with specialties in Intensive Care, Trauma, and Flight Nursing, Karen DiMarco (who is writing this in the 3rd person, which is weird, but apparently the standard for bios), had an experience in 2011 that she describes as “a coming home.”  Within weeks of that profound moment  – on the floor of a closet in a puddle of snot and tears –  her mental and physical illnesses, and a 26-year history of eating disorders, melted away.

Since then, she has been a catalyst for transforming the way we deliver and conceive of health care and wellbeing. Put simply, the mind and body are not disconnected, and when misunderstandings of the mind are healed, there is a profound healing effect on the body.

Karen is a total geek about science, and the connection between the mind and the body.  Her insatiable appetite for all things spiritual and biological, and her ability to communicate her understanding in a scientific, sometimes hilarious, and always easy-to-understand way, is what makes her both a total weirdo and incredibly impactful as a healthcare visionary and transformational coach.

Hobbies include: collecting sea glass and coaching certifications; reading, research, yoga, and ‘playing with herself’ (nutrition, biological alchemy, meditation, & quantum-whatever); hanging-out with family — including Frank, 3 teenage daughters, 2 rodents, and a small dog named “Mr. Big” (who often make appearances of some kind or another in her 1-to-1 coaching, courses, writing, and speaking engagements.)

Here are a few ways people invite me to hang out, and see some cool shit happen:

1:1 Transformational Coaching Packages – I used to wish I just had someone like me to talk to… except without all of my drama and baggage, so I could finally get some clarity, freedom, and peace-of-mind. This is that. We’ve got this. Click here to ask about my coaching.

The Naked Community – The purpose of Naked is to give people (like me, scratching my own itch here) who are a bit of a…uhh…“spiritual renegade” a consistent place and community, to learn, laugh, and grow. A safe space for discovery, coaching, and support to help you care LESS about the opinion of other people so that you can LIVE OUT LOUD, and close the gap between who you truly are, and who the world told you that you ought to be. Click here to learn more.

Events – View all the cool stuff I have coming up by clicking here.

Short story, I LOVE getting invited to conversations, collaborations, and quirky costume parties, and I would be delighted to get an email from you!

Or, if none of the above is your thing, I often write love letters to the interwebs, and sometimes do group courses and retreats, and other fun stuff.  If you’re interested in any of THAT schizzle, fill out the thingy below that signs you up to get the goods by email, or carrier pigeon, or whatever technology is in these days…