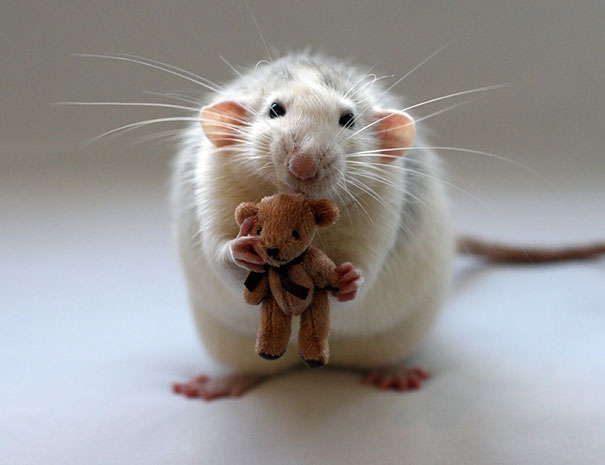 After two days of searching for this rat who was supposed to feed the python, and somehow snuck out of the box we were keeping it in, and into my purse to escape into my truck (long story), we caught him.

[Back story/science: Reticulating snakes (pythons, boa constrictors, etc) – that is, snakes that eat their prey by biting it around the throat, squeeze it until it suffocates, then eat it whole – can’t and won’t eat when they’re shedding because they’re blind with temporary cataracts. It’s kinda like when you get a bad sunburn and your skin turns white before it peels? Same thing. There’s a white coating over the snakes eyes that blinds them, so they can’t see their food to strike and eat it while they’re shedding.

So when I recently got a small rat for our python, “King,” to eat, and he just meandered around the feeding box – sticking his tongue out at the rat, but not doing anything about it – I knew it was bad timing. So we put the rat in a moving box in the kitchen, and waited.

The stow-away rat (who’d FREAKED ME OUT for 2 days by walking over my feet and making scratchy, scritchy rat noises in the truck while I was driving) was sleeping in the passenger door pocket – the one that your kids impregnate with candy wrappers, unused ketchup packets, Starbucks straws, used tissues and boogers that don’t make it out the window.

Sofia opened the door to claim the shotgun position for the morning school run, and there it was – shocked python food, looking up at her with nowhere to run.

“Cover the pocket with your binder, Fi. I’ll grab a Tupperware to catch it!”

I ran to the back of the truck get the Tupperware that served as an overnight rat hotel, with dog food and paper towels for the thing to tear up (hopefully in lieu of break lines and electrical wires); dumped that all out and ran over to where Sofia was dutifully executing her job as door pocket warden.

I gave a nod when I reached her side: “NOW, Fi,” and she lifted the binder to reveal the rat, braced against the floor of the door pocket, limbs spread as if there was about to be an earthquake.

My intention was to shoo the thing into the Tupperware with the lid, but when I saw it, braced for the worst, something made me put down the plastic and reach for it with my bare hands.

As I grabbed the soft little thing, it startled and tried to run, but I had my hands cupped around it back-to-front in a non-squishy way… like you’d hold a butterfly loosely – to observe it, but not let it go.

Then it happened… the thing poked its face out of the little circle-hole made from the index finger and thumb of my cupped/loosley-clenched hands (the circle that you make to say “OK” with your hand, but tighter.)

Our eyes met – mine and the rat’s – and its body went suddenly still, except for the incessant sniffing of its nose and wiggling of its whiskers to ascertain if I was going to eat it, or not.

We stared at each other for forever, something weird passing between human that regarded rat as python food and truck-nuisance; and rat that regarded human as the asshole that was going to feed it to a python.

What passed was a sudden empathy, I guess? I know it was on my part, but I don’t know a rat’s mind. For it, perhaps, just relief that it wasn’t eaten right away… so curiosity bloomed.

Sofia brought me to my senses with: “MOM! I’ve got to get to school! What are you going to do with it?”

I put the thing in the Tupperware, and ran inside to get the box from which it had escaped.

I threw the rat in the box, on the driveway, so if it escaped again it would escape into the world, and not into my house or truck.

When I returned from the school run, I peaked in. Expecting the rat to be long gone. But there it was, staring up at me as if it had been waiting for me to open the lid to further contemplate my intentions by shooting little, black-eyed daggers into my soul: “what’re you going to do?”

The first thing I knew to do was to keep it alive. For now, it was still a bitter combination of fattening the calf for slaughter, and what would make a traumatized rat feel better after nearly being ‘thump,’ ‘squeeeak,’ ‘CRUNCH’ed for python food; and spending 2 days hiding in a truck whose owners want you at best OUT and into a world where you’d definitely be eaten; and at worst, just dead (as long as it wasn’t dead in the truck.)

Two days went by. I moved the box into the garage, because outside was much too hot in Southern California.

I kept checking-in on the python food… telling myself that it was worth not having to spend another $6, and a trip to the pet store when the python was finished shedding.

Each check-in, I’d pet the rat, hold it for a second, reassure it that as long as it was under my roof its essentials would be taken care of.

Each check-in bringing a greater awareness that there was no way I could see harm come to this little thing.

This morning I asked Lucia if she’d held “King,” our pet Python with temporary shedding cataracts, to see how he was doing. And if he’d shed his skin yet. She hadn’t, so I check it out for myself.

King still hadn’t shed, and his eyes were so opaque they were blue.

So I went to the local, commercialized, big box ‘PetSmart’ store, and bought a cage equipped with a water bottle, a wheel, a food bowl; and a little shelter (that serves as both chew-toy and hiding space,) rat food, and a rat toy.

I got home and opened the box in the garage to visit the friggin’ rat – which now had it’s own food and water bowl, ‘toys’ (tunnels that I’d made over the past couple days by cutting off the tops and bottoms of water bottles, and lining their sharp edges with paper towels) – picked the thing up, and held it the same way I did when I’d caught it from the passenger side door of the truck.

The rat peaked out of the tight “ok” sign I made with my thumb and forefinger to say “Hello, Mom. What are you going to do?”